Facts about lightning that can save lives 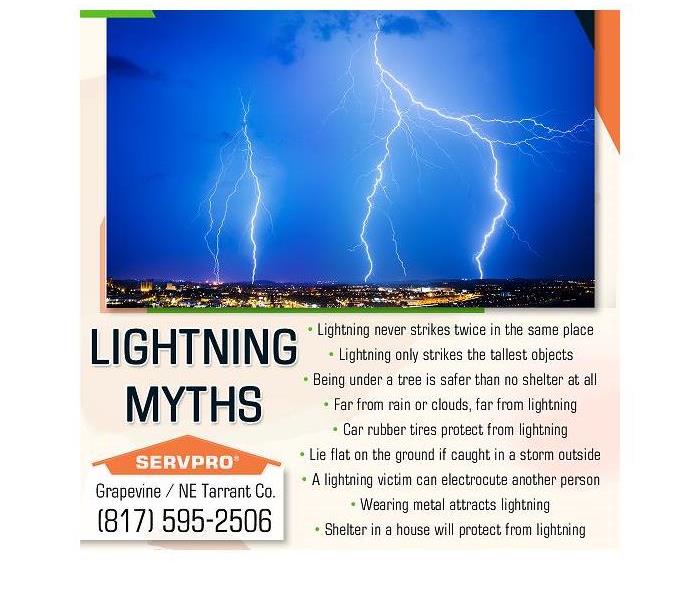 Every year, lightning detection systems in the United States monitor an average of 25 million strokes of lightning from clouds to ground during almost 100,000 thunderstorms. SERVPRO busts some myths that surround lightning and sheds light on facts below.

Lightning is a giant discharge of electricity accompanied by a brilliant flash of light and a loud crack of thunder. The spark can reach over five miles in length, raise the temperature of the air by as much as 50,000 degrees Fahrenheit, and contain a hundred million electrical volts.

During a thunderstorm, it's best to take shelter but in case a safe shelter is not available, knowing the difference between lightning myths and the facts could prove to be a lifesaver.

Fact: A tall, pointed object is a magnet for lightning. Therefore, lightning will often strike such a structure repeatedly. The Empire State Building is known to have been hit by lightning up to a dozen times during a single storm.

Lightning only strikes the tallest objects

Fact: Even though lightning is attracted to tall objects such as skyscrapers, trees, and lightning poles, it can and does hit the ground, cars, and parking lots. Lightning can strike anywhere indiscriminately.

Being under a tree is safer than no shelter at all

Fact: Taking shelter under a tree is one of the biggest causes of lightning casualties. When lightning strikes a tree, the “ground charge” is likely to spread out from the tree in all directions. A tree during a lightning storm is bad news.

Far from rain or clouds, far from lightning

Fact: It is not the rubber tires that offer protection during lightning in a car. It is the metal roof and sides that divert lightning. Therefore, convertibles, motorcycles, bikes, open-shelled outdoor recreation vehicles, and cars with plastic or fiberglass shells are sitting ducks for lightning disasters.

Lie flat on the ground if caught in a storm outside

Fact: When lightning hits the ground, it spreads out potentially deadly electrical currents along the ground in all directions. Lying down offers more contact points for electrocution.

A lightning victim can electrocute another person

Fact: It is absolutely safe to touch and offer first aid to a lightning victim since the human body doesn’t store electricity.

Fact: It’s not the presence of metal that determines where lightning will strike. Factors such as the height, pointedness, and isolation of the object determine the lightning target. Having said that, being close to or touching a metal fence during a thunderstorm is unsafe as the electricity can be conducted across the fence and electrocute a person.

Shelter in a house will protect from lightning

Fact: A house is one of the safest shelters during a storm but one must take certain precautions inside a home as well to avoid being electrocuted. One must avoid any conducting path leading outside, such as electrical appliances, wires, TV cables, plumbing, metal doors, or metal window frames. Standing near windows must be avoided. The safest option is a professionally installed lightning protection system.